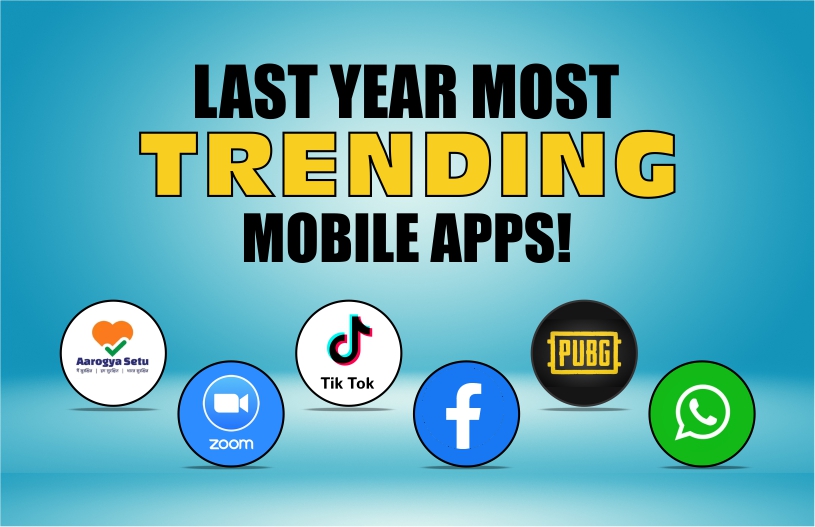 Recently a survey was conducted across the Globe to know which Mobile Applications (Apps) are most trending? What type of Apps are most liked? What are the statistics? What is the individual score of the Apps as in which App is how many times downloaded? On what platforms are Apps mostly downloaded? Further every aspect with which Mobiles Apps are related in any which way.

The result that came was not very shocking rather pretty much evident. The most downloaded App of 2020 was “TIK TOK” with 850 million downloads, followed by WhatsApp with 600 million & Facebook with 540 million, and so on. TikTok does have the advantage of being available in China, as Douyin, which accounts for about a quarter of its downloads. None of the other apps on the list are available in China.

It was the year of video – conferencing through the Zoom App. All the schools were going online which is still prevailing because of Covid-19. Zoom App is one of the good options for both – the Teachers as well ad the Students. Not only that, many office meetings, seminars, are conducted via this app. In the United States, Zoom App comes in the second position after Tiktok, which also shows its popularity among users.

In 2020, many Apps were banned in India because of various reasons such as “TikTok” was banned because of the India-China war, “PUBG”  was banned as it was making young kids, teenagers literally crazy and extremely violent. People were extensively involved in these applications without even considering its impact on their daily well being

In India, most downloaded App was “Aarogya Setu” with 140 million downloads which is an Indian App for  “contact tracing, syndromic mapping, and self-assessment” digital service, primarily a mobile app, developed by the National Informatics Centre under the Ministry of Electronics and Information Technology. After that, “Tiktok” was the most downloaded app with 120 million downloads, followed by some other Apps like, WhatsApp, Zoom, Facebook but on June 29, 2020, it got banned because India-China war.

What’s shocking is that there was no Indian App on the list of India. This shows our real position & status. Where do we stand Globally as “Mostly populated country”,” Maximum audience”  and “Least Quality Work”?

In our country, there are so many website Developing & Designing companies. That understands Client’s vision and presents user-friendly Apps as they are the ones who are ultimately using it. But when it comes to fighting with other countries we really need to investigate ourselves in this matter. Where are we lacking? How can we improve our productivity? How can we surpass the western Apps in a healthy way? Because if we take it in the right spirit, only then we will be able to grow as the “Best Mobile Application Developers & Designers”.